Welcome to the Stevenage Golf Club May newsletter

Well, at long last the winter has gone and the golf season is now in full swing. Friendly League is in full flow, competitions are coming thick and fast and the course is looking green and lush. Bliss!

One of the most interesting thing is that, since the last newsletter, it’s been the 1st hole – not the 14th – that has been giving people (including myself!) a bit of trouble. Record amounts of topping, slicing and hooking going on in full view of your fellow competitors. At least there will be no shortage of friendly “advice” should you top it with your first shot!

Hope you enjoy the newsletter and indeed the new website – take a look around – click here for the home page – and any feedback or pictures of people doing silly things should be sent immediately to simonhinton@ymail.com

We as a club work very closely with SLL to try and improve the facilities and we both need each other to be successful in what we do.

From the Noticeboard  you can see that we have a wide variety of competitions organised for this year. I would also encourage all members to consider trying out for our representative competitions. It is a great way to meet different members and does encourage you to play better golf.

There is a great committee behind me who are always ready to support in whatever way is needed and I look forward to working with all of you as a team.
Hoping you all meet your individual goals both on and off the golf course for 2018 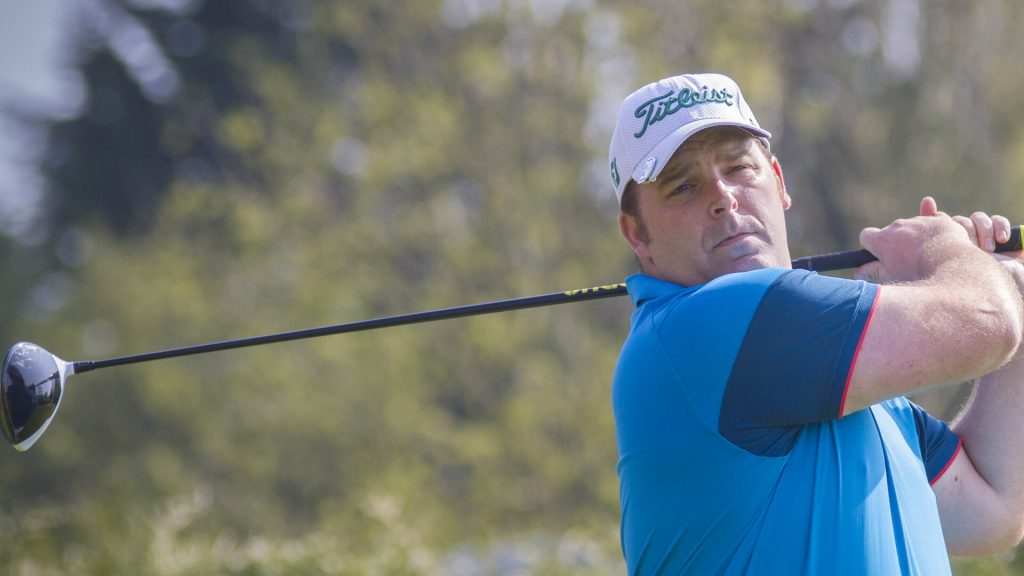 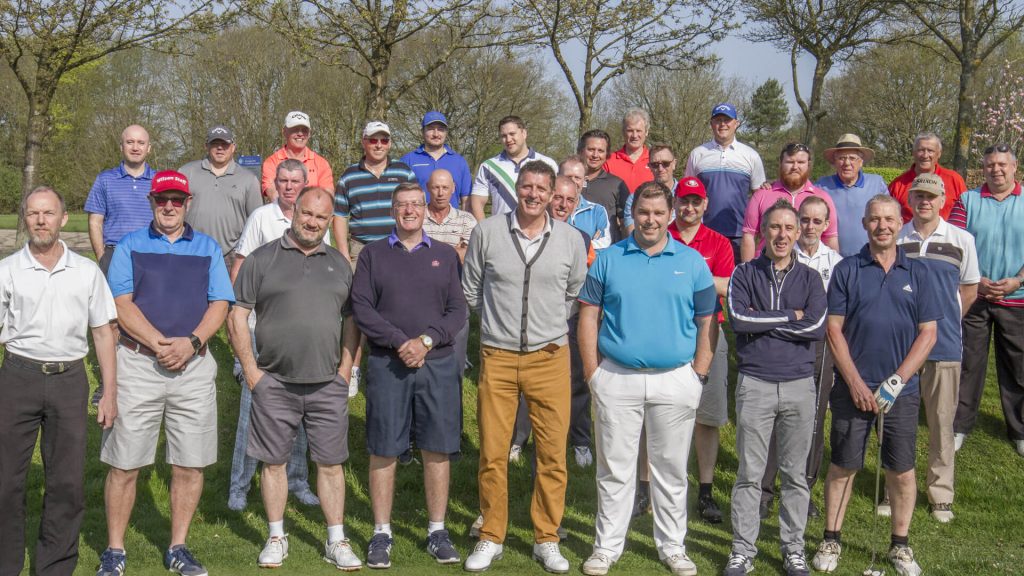 The crowd at the Captain’s Drive in

May Saturday Medal, With Qualification for the Lombard Trophy,  Was won by Paul McEwan with a net 70 from Paul Smith with 71.

May Sunday Medal Was won by Richard Moore with a net 71 from Bob Morris on countback.

The Summer League has started and the results of the second round was:

And Wikus Nortje and Roy Wilson on 39

The Clubman Shield was won by Dave Mudd with a nett 70 – four shots ahead of Rich Moore and Bob Morris in second and third place.

Paul McEwan is presented with the Albright Trophy

This section of the newsletter is a quick update on the actual rules, peoples general understanding of the rules of golf and ‘local rules’ employed by both the club and the course.

The following are extracts from the R&A Rules of Golf,

17-1 Flagstick Attended, Removed or Held Up

Before making a stroke from anywhere on the course, the player may have the flagstick attended, removed or held up to indicate the position of the hole.

Note 1: If the flagstick is in the hole and anyone stands near it while a stroke is being made, he is deemed to be attending the flagstick.

Note 2: If, prior to the stroke, the flagstick is attended, removed or held up by anyone with the player’s knowledge and he makes no objection, the player is deemed to have authorised it.

Note 3: If anyone attends or holds up the flagstick while a stroke  is being made, he is deemed to be attending the flagstick until the ball comes to rest.

*In stroke play, if a breach of Rule 17-2 occurs and the competitor’s ball subsequently strikes the flagstick, the person attending or holding it or anything carried by him, the competitor incurs no penalty. The ball is played as it lies, except that if the stroke
was made on the putting green the stroke is cancelled and the ball must be replaced and replayed.

And  17-4 Ball Resting Against Flagstick

When a player’s ball rests against the flagstick in the hole and the ball is not holed, the player or another person authorised by him may move or remove the flagstick, and if the ball falls into the hole, the player is deemed to have holed out with his last stroke; otherwise, the ball, if moved, must be placed on the lip of the hole, without penalty.

We can all agree that in the main the new booking in system is working well and almost everyone seems to have got the hang of it!  However, we are aware that there is still an issue around competition days and that having single tee starts can, inevitably, lead to some teeing off at 11.00am and later.

In June we will be trying out doing a pre-draw and publishing it a day or two before a competition on Saturday.  This will mean that you will know in advance what your tee time is, so if you are in the last group you won’t necessarily have to be at the Club for 09.00!  This will only be an experiment to gauge the feasibility and get some feedback.

How did you get into golf?

When I wsas a young man, my brother started playing, so I played along too.  Unfortunately I fell out of love with golf, but got back into it 15-20 years ago. I started at Panshanger, but actually it was my mother in law who really got me back into golf! I used to play left handed but I could never break 100. The Pro at Harpenden noticed and threw a golf ball to me.  I instinctively caught it in my right hand. From that moment on I’ve played right handed. The rest is history!

At Aldwickbury Park – I hit a shot to six inches on a par three.  I’ve never been close to a hole in one since!

Fact about you that Members won’t know?

A couple actually.  First, I used to be a fingerprint expert at New Scotland Yard for 10 years!  Also, I used to play piano and won a scholarship to the Royal College of Music.  Andrew Lloyd-Webber’s father was my tutor!

What do you love about Stevenage Golf Club?

There’s loads to love about the place.  I love the course and the Saturday Gang!  I also love the fact that it’s so close to my house, making a cheeky 9 holes after work nice and easy.

To learn how to chip properly!

Note – David had unfortunately left his famous chipper club at home, so I was unable to give him the required levels of gyp.  He does admit it’s an old man’s club!

As you swing, say in your mind, say swing….set…through…. it really helps with tempo.  I do it on every shot I take.

Royal Birkdale.  It beat me up, of course, but I got a par so I was well chuffed!  I’ve visited Pebble Beach , although I didn’t play it.

Graham Newell looking very pleased with himself with his approach on 14 – leaving a tiddler for birdie, which he made, naturally!
Photo courtesy Roy Wilson

This edition, by way of a change, it seems to be the 1st tee that is causing all the trouble!  However fortunately, if you top it off the first there are always plenty of people ready to offer a kindly word and advice! 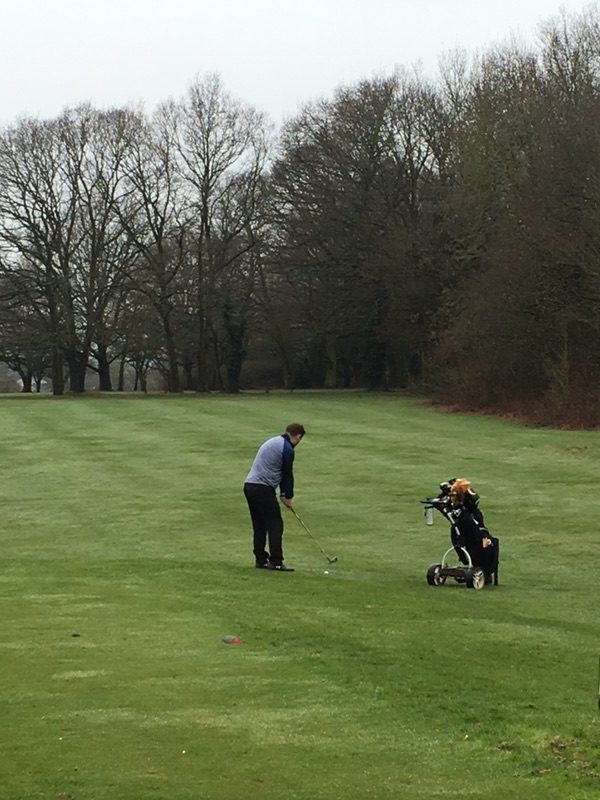 Dave “Desert” Stevens on the 1st.   Or rather the chipping green.  The idea is to practice BEFORE you tee off!
Photo courtesy Mike Murray Media Productions

Pete Nicholson’s second shot on the 1st.  Apparently his first went hard left, hit a bag and ended up short of the yellows.
Photo courtesy Tony May Sneaky Photos Ltd 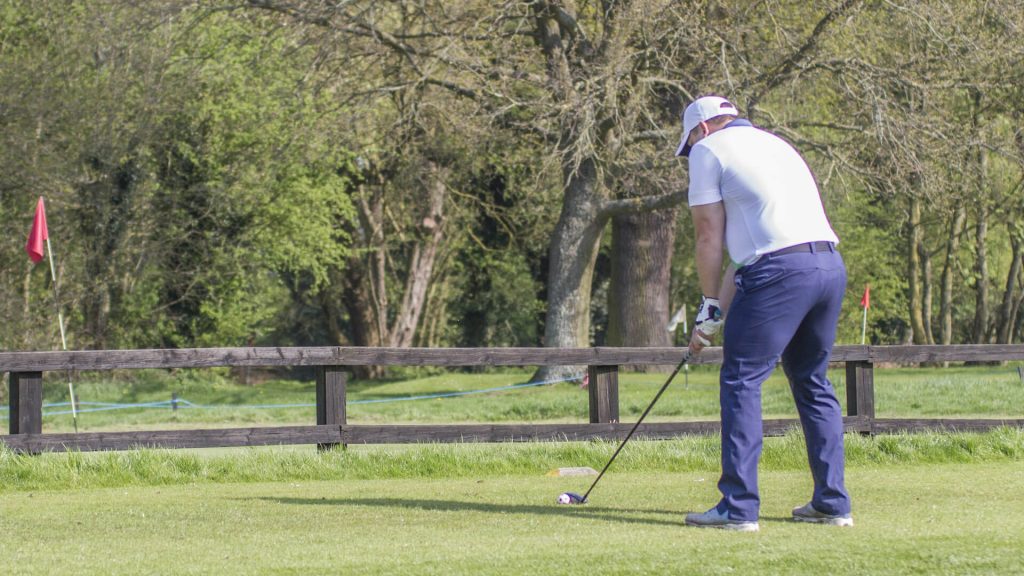 Wickus taking his first and second shots on the 1st.  He didn’t have far to walk.  My professional opinion is that he is standing too close to the ball.  After he has hit it!

Rich Moore on 14.  A classic layup.  Let’s hope that ball has a bit of draw on it!
Photo courtesy Mike Murray Media Productions.

Garry Phillips laying up short and left on 14.  Malcom Stamp is photobombing as he is looking for his ball from the group behind playing 13!
Photo courtesy Tony May Sneaky Photography Ltd. 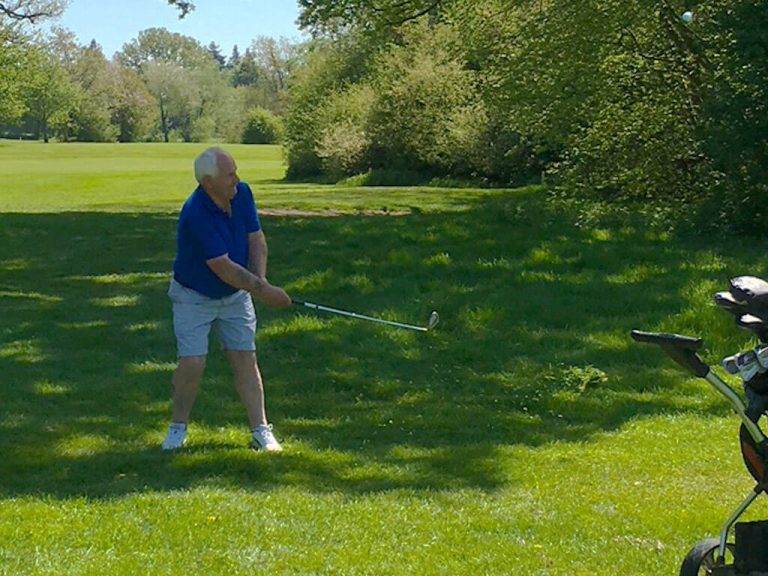 John Wallace trying to hide in the shadows.  He should know you cannot hide from Rogues gallery when you follow Garry very short and very left on 14!
Photo courtesy Tony May Sneaky Photography Ltd.

On Friday 16th March Stevenage Golf Club, represented by Phil Gregory and Kev Fisher, played their 1st round of the Daily Mail Foursomes national competition. Having been drawn away at Whitehill and giving away 12 shots, it was a potentially tough ask. Although the course is hilly and usually windy the guys got off to a good start winning 2 of the first 4 holes. Not content with a good start however, ‘little’ and ‘large’ pressed home the advantage and made the turn 4 up before adding another hole on the 10th. This is where the tide turned with the pair from Whitehill playing the next 6 holes in -1 gross and with shots on 4 of those holes. Standing on the 17th tee it was all square.  The Whitehill team hitting the 17th in regulation but 3 putting from 15ft with us needing a tricky up and down for Par and a win with the larger of the team holing a 6ft putt for the win. Up 18 we went with a slender lead. This 580yd uphill Par5 would sort the men from the boys and with wind into and a wet fairway still required a 3 wood for the 3rd shot. Knowing we were giving a shot away and with the opposition making a 6 net 5 it left us needing to hole an 8ft putt to secure the half and a win on the day. Needless to say this was rammed in the back of the hole to much celebration and fist bumps.

A great match to be a part of and come out on the right side. Stevenage have now been drawn against Letchworth away on 7th April.

In all the excitement, Kev managed to leave his clubs sitting proud in the middle of the car park before driving off !!! 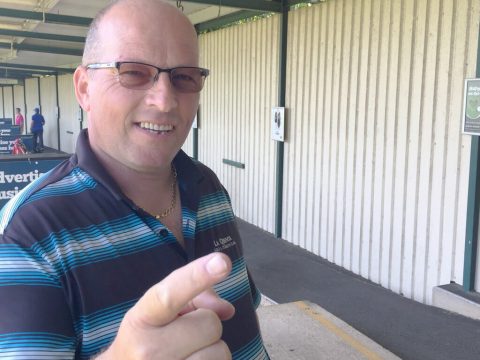 It’s a great honour to be asked to pass on the benefits of my experience to you – the humble golfer.

As you know, I have great knowledge  not only of golf, but in life too and I’m only too pleased to pass on my encyclopaedic knowledge. Here, then, are this month’s Lakey’s Lessons.  I hope you enjoy them and benefit from them.

Do you know of any SGC members that look like famous golfers?  To start us off, here’s a corker courtesy of Rich Moore

Video Of The Month

Did you see the story about the club golfer who wrote to Thomas Bjorn ruling himself out of Ryder Cup selection? Well, Thomas decided to pay him a visit…

Thanks for reading this Stevenage Golf Club May newsletter.  If you like the look of what’s going on, why not consider membership?  The a look at our membership page and get in contact with us and you too could appear in this very newsletter!

The Expert’s Guide to the 14th Hole

This site uses Akismet to reduce spam. Learn how your comment data is processed.